The story of the High Performance Engine

After I bought the 1986 Corvette, I wanted to improve the 69 Vette's engine. The original 350/300 engine had 130,000 miles on it with no internal work done except for replacing the timing chain and gear after a section of nylon teeth on the timing gear broke off. In addition to being tired, the engine's 10.25:1 compression ratio made the gasoline available in the late eighties unsuitable. When up to normal operating temperature, the engine would ping badly under even a light load, with the best gasoline readily available.

I talked to the folks at Rigsby Crankshaft (now Sheldust) in Pacheco, CA about adding some performance to the engine. Art said if I wanted to build a stout, streetable motor, I should start with another block. The reason is that all Corvettes have the Vehicle Identification Number (VIN) stamped on the machined surface on front of the block. If I were to blueprint the stock motor, the numbers would be obliterated, lessening the value of the car to any serious Corvette enthusiast.

Since another block would be fairly easy and inexpensive to obtain, that was what I did.  I wanted a "4 bolt main" block, because all Corvette motors had them, and while the additional strength was not absolutely necessary for the motor I was building, it was the right thing to do. I scrounged around the wrecks at Martinez Auto Dismantlers (now defunct) until I found a four bolt block in a Chevy van - with the same casting number as the original, 3970010, a real plus! One of the wrecking yard workers raised the van on a fork lift, and cut the motor mounts out with a "fire ax". The block dropped free and I was on my way.

The folks at Rigsby then did their magic:

While the block work was progressing, I was collecting the new parts I would need to complete the engine:

The heads and intake manifold went to Granny at Air Flow Technology, who did the head work using a flow bench. Granny did a 3 angle valve job, cleaned up the ports and matched the intake manifold ports to those in the head, to help the motor breathe. And breathe it does!

Once I had all the parts and the block was complete, I assembled the top-end of the motor and put it in the car.

Of course, it was not as easy as just saying it. For instance, the aluminum water pump was slightly longer than the old one, so I had to make a spacer to move the pulleys on the harmonic damper out enough for the fan belts to align. I fabricated the stainless steel tubing I used for the positive crankcase ventilation system, and for the fuel lines.

The cast magnesium valve covers had oil drip protrusions that interfered with the rocker arms, so I ground them all off.

I drove it about 1,000 miles and parked it for 13 years while I went out and played with CBX motorcycles.

13 years later, I began the process of getting the old boy back on the road. It runs much better now, but I had to clean the carb, because it had dirt in the needle & seat - fuel was dumping down the secondaries at idle. That fixed it - it doesn't run nearly as rich as it first did 13 years ago.  At the same time, I also changed the 65 power valve to a 75 to see if that made a difference. I may go back to the original 65 so the power valve opens at a lower vacuum, perhaps giving a little better fuel mileage. In 2011 when I tore the carb apart in an attempt to determine the problem I was having with the engine cutting out, I installed the original 65 power valve. Here is a Holley video explaining hows and whys of power valves.

In the spring of 2004, I put on new B.F.Goodrich Radial T/A tires - the old Goodyear Eagles had flatspotted pretty badly after sitting all those years - and had the seats redone with new covers and foam - they look and feel like new!

In 2005 I had the front suspension rebuilt with new bushings, ball joints, tie-rod ends, idler arm, sway-bar bushings and links, and a new steering box.

Then I had the rear suspension rebuilt with new trailing arm bushings, and wheel bearings, new strut rods, and a single leaf composite rear spring. After a four-wheel alignment, it seems to ride and handle like it did when it was new - better in fact, because when it was new it had crummy bias-ply tires.

Then I replaced the original exhaust with a chambered 2.5 inch system that was very, very loud and fun to drive - the chambers were like those on the RPO side pipe exhaust. I can't believe those sounded as loud as this system does. Maturity finally caught up with me and I had a couple of Magnaflow stainless steel mufflers put in the stock location in the rear fenders. It sounds much better, not stock quiet, but mellow with a snarl when I get on the loud pedal.

I installed a breakerless electronic ignition conversion kit in the distributor to eliminate the points and condenser. Link.  Then I had the dirtributor advance calibrated to the engine build. It came out like this:

With an initial setting of 10° I now have 36° at the recommended 3,200 rpm.  The mechanical advance now begins sooner than before and reaches the maximum at a lower rpm.  I have full vacuum advance of 14° (at the crank) at idle, which the engine really likes.  These changes in the advance curve really made the engine stand up and perform to its potential.

Out with the old.

Pulley Adapter front and back.

The original engine cleaned up and painted. It is stored in a safe place.

I'm trying to think up my next project on this never ending quest to make this car just how I want it.

It's ready for show and go!  I think the go part is nicely taken care of...

Early on in the planning process for this engine, I happened to read this article in Hot Rod magazine. Here was an inexpensive way to build a brand new top-end on the block I would soon acquire. Based on the results of the dyno runs in the article,by building a similar engine, I would have a reliable, strong running Corvette engine. 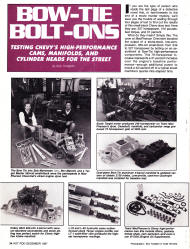 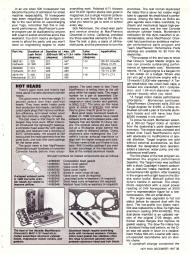 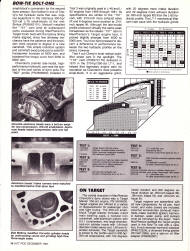 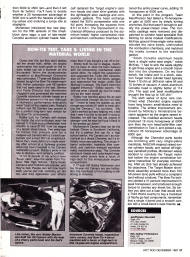